Christianity and the Environment 2

Anti-Earth argument #2: It’s the end of the world as we know it…

The idea that the end of the world is upon us is nothing new, especially to Christians. Even before Jesus, certain sects of Jews believed in the imminent end of the world, the coming of a messiah and the reign of God on Earth. Many early Christians believed they were living literally in the last generation of mankind; Paul’s letters suggest an urgent and watchful anticipation of the end of the world. The book of Revelation provides us with graphic signs of the apocalypse, which many try to equate to modern objects. Some see the natural disasters of the world not as warnings of environmental problems but as precursors to the final days, signs of the world getting worse before it can get better, as in Mark 13.
Well, they’ve been wrong so far.

Both Jesus and Paul warn against trying to gamble against God in predicting the end of the world. The call is instead to live this life in preparation for the next: we are called to live on earth as in heaven. Like in the first argument, we should see earth and heaven as connected. During the time in which the Christian scriptures were written, divide between the two was not as great, nor was the difference between past and future. Instead, contemporary thought reflected a belief in the coexistence of all things on heaven and earth, and all times past and present. The Greeks even had two words for time itself: chronos and kairos. Chronos refers to the measured, exact time of chronology and everyday life; kairos is used, especially by Christian writers, to express “designated” time by God, unique time not comparable to the time by which we are confined. Thus we get an idea of the conception of parallel existence, that our own actions now here on earth coincide and relate to the heaven and God’s time.
Posted by Who we are at 1:26 PM 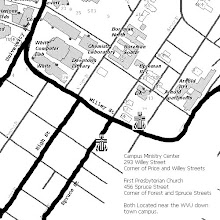